Amongst the tradable commodities and energies available at TigerWit is Natural Gas. There are many micro and macroeconomic factors that can cause the value of natural gas to rise and fall, and this is one of the many reasons that it remains popular with traders.

Natural gas is one of three energy products that clients of TigerWit can trade as CFDs.
Gas is seen as one of the cleanest of the fossil fuels and as such has an important place in the global energy mix and the transition towards a lower-carbon future, that global warming and climate change necessitate.

We offer CFDs over Henry Hub Natural Gas, traditionally a US-centric gas contract traded as a future, on the Nymex exchange, in New York.

However, the contract is becoming a global benchmark in energy trading, as the United States becomes a more significant exporter of natural gas.

According to data from the CME (the Chicago Mercantile Exchange, owners of the Nymex) Natural gas is the third-largest physical commodity futures contract in the world, with some +400,000 contracts traded on a daily basis in the United States.

The “Henry Hub” in the title of the New York based contract is the name of the delivery point in Louisiana, for gas traded on Nymex.

However, if you trade natural gas using our cash-settled CFDs you will never have to worry about making or taking delivery of the contract. Instead, you will simply receive or pay away money equivalent to the PnL of your closed trades.

Natural gas CFDs can be traded 24 hours a day 5 days per week with only a few short trading breaks per session. Fossil fuels are still a key component in the global energy landscape, and one of the biggest consumers of gas is the power generation industry.

In the UK, for example, gas accounts for some +40% of daily power generation according to data from the UK National Grid and it is often the biggest component of the country's energy mix. US power generation is also a significant consumer of natural gas; the fuel accounted for around +38% of US power in 2019, according to the United States Energy Information Administration or EIA as it’s known.

Natural gas prices are sensitive to the weather and climate, not least because gas is also a very popular fuel source for domestic and commercial central heating. In fact, one of the biggest price spikes in the history of the contract occurred in the latter part of 2018 as a cold snap descended over the United States see the chart below.

Source: Investorsintelligence.com
Natural gas prices have generally been trending lower since that spike, as gas production in the USA has increased, thanks to new extraction methods such as fracking. The chart below shows the growth in gas production in the United States over the last 120 years. It’s perhaps not surprising then that gas has become one of the busiest contracts on New York’s NYMEX exchange. 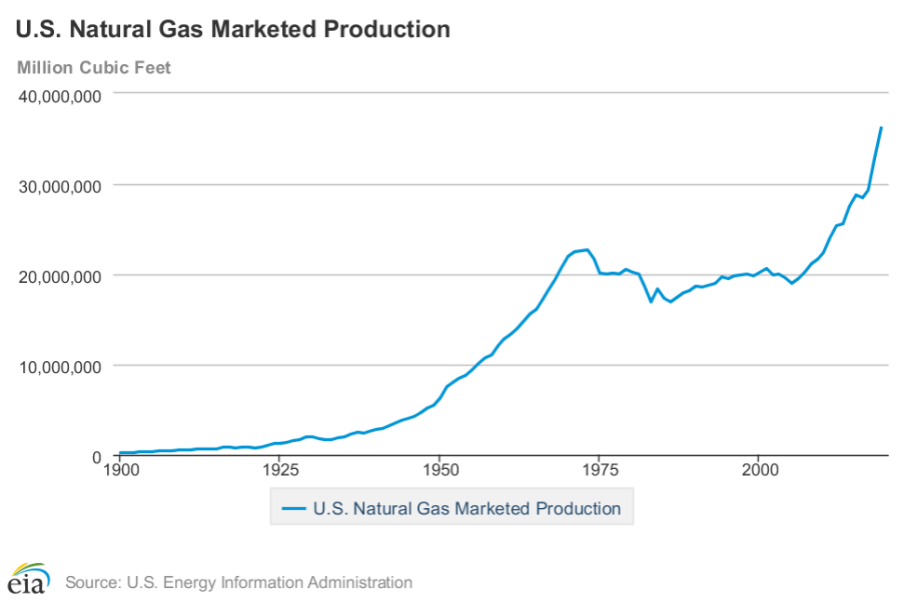 How does natural gas trading work?

Natural gas futures contracts are priced in US dollars and cents each contract is over 10 billion (10,000 million) BTUs or British Thermal Units. A BTU is a measure of heat or energy and it is defined as the amount of heat or energy required to raise the temperature of a pound (or 453 grams) of water by 1-degree Fahrenheit. In the metric system, the BTU is equivalent to some 253 calories.

There are 12 monthly contract dates in natural gas futures and the minimum tick size or price movement in the contract is US$0.001 per BTU. Which means that each tick or minimum price fluctuation is worth US$10.00. The contracts trade continuously for 24 hours a day with a 60-minute trading break.

Natural gas is traded around the globe though, in other regions such as Europe and Asia, gas markets are typically OTC or Over The Counter, and are aimed at the commercial energy industry, rather than investors and traders. Unlike the gas market in New York which has both groups in mind.

Natural gas can be cooled, liquified and transported across the globe to meet demand. It can be transported by pipelines or in specialist ships known as LNG carriers.

Liquid Natural Gas or LNG is exported when the natural gas price in an overseas market is higher than the local price, plus the costs of transportation to that overseas market the use of LNG carriers has been instrumental in matching supply with global gas demand.

In recent years Japan, which has few energy resources of its own, has been the largest importer of natural gas though much of that is sourced in Asia and Australasia. China is another major importer of gas even though it is a producer of the commodity.

Chinese demand for gas is expected to grow as gas assumes a bigger role as a cleaner alternative to coal in the country’s energy mix. In 2019 China and Russia completed the construction of a gas pipeline that will supply northern China with natural gas from Siberia.

The answer to that question is, it can be.

Not only do traders need to get the direction of their gas trading right, but as with all margin trading, they need to size their natural gas trades appropriately.

As a commodity that is traded across the world gas prices are rarely static as supply and demand fluctuate. That means there are usually plenty of trading opportunities, on both the long and the short side. But of course, the flipside to that is that natural gas prices can and do move overnight and traders need to factor that into their planning.

Trading natural gas as CFDs on margin can involve a high degree of risk if you don’t plan and execute your trading strategy sensibly. That said all trading can be high risk if it’s undertaken without the proper due care and attention.